How *Not* to Play with Programmable LED Strips

You Need That Resistor

That resistor on the data line? Yeah you need it. Otherwise you might blow an LED which renders the entire rest of the strip useless. If that happens cut out the first LED and solder the power and data lines directly to the second LED.

Using jumper wires, of the 300-for-$5 variety is fine for a few LEDs. If however you have 300 LED drawing around 1A then those thin wires have non-negligible voltage drop. For me this was on the order of 0.7V or more. This means even though my power supply was putting out 5V the LED strip was only seeing 4.3V, causing flickering of the LEDs.

For any piece of wire the voltage drops increases with current simply because of V=IR. Thicker wires have less resistance per unit length and therefore less voltage drop per unit length.
Posted by Steve at 01:37
Email ThisBlogThis!Share to TwitterShare to FacebookShare to Pinterest
Labels: electronics

The Subtle Poison of Religion

On the 12th of November 2019, Nationals MP Barnaby Joyce said on TV that:


I acknowledge that the two people who died were most likely people who voted for the Green party, so I am not going to start attacking them. That's the last thing I want to do.

Why does the politics of the deceased matter and why would Mr. Joyce make such a speculation? I can't help but think that Mr. Joyce did it because, on some level, he thinks those people deserve it. I think this is the subtle poison of religion: that those who do not believe as I do deserve less than I do.

This idea is widespread across all variants of Christianity: you are saved if you believe in God and Jesus and the Holy Spirit but damned if you don't. You deserve salvation only if you Believe. It is this idea that motivates the Evangelicals: they must Save you by spreading their Belief so you, too, deserve salvation. It is this idea that underpins the prosperity gospel: those who Believe is deserving of wealth and therefore the harder you Believe, whether by praying harder or donating more to the Church, the more you deserve wealth. Conveniently if you are wealthy then obviously it is because you deserve it due to your faith.

Some would claim that it is possible to separate one's religious beliefs from one's political actions. I reject such claims in the same way I reject any claims one can be racist and still be a fair judge. Some would claim that some people think thusly even without religion and I would agree. However some religions requires such thinking. Some would say not all religions features undeserving unbelievers and claim my title is inaccurate and I would concede their point but also point out that the major religions do not fall within this category.
Posted by Steve at 18:20
Email ThisBlogThis!Share to TwitterShare to FacebookShare to Pinterest
Labels: australia

Had bit of a rocky start with bed leveling but nothing a bit of patience won't fix. It prints reliably now though I have plans for a semi-assisted bed leveling jig.

Over the past week I have worked on and off on an iPad mini holder to position it above my monitor so I can use it as a status screen or as a monitor to watch twitch while I am doing menial tasks. 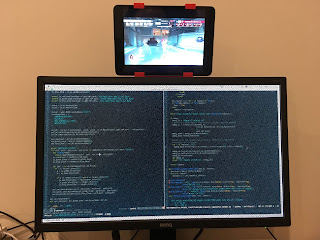 I also made a small headphone hanger to save a bit of space. 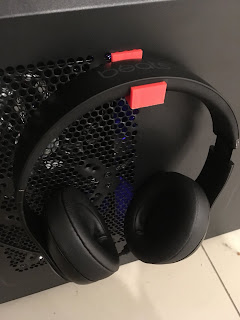 Both of these designs were made in Fusion360, my first with the software. Normally I use blender because that's what I comfortable with but the Fusion brings a lot to the table and I will be using it going forward. It doesn't hurt that experience and skills with Fusion will be useful in an industrial setting.

Next on the list is some replacement end-stops for a wall hanging and a keypad bruteforcer.
Posted by Steve at 12:19
Email ThisBlogThis!Share to TwitterShare to FacebookShare to Pinterest
Labels: 3dprinting, fusion360
Newer Posts Older Posts Home
Subscribe to: Posts (Atom)